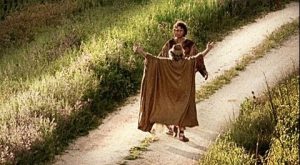 Here is a devotion from pastor Ken.

Let’s take a moment to engage with one of the most significant teachings of Jesus concerning God’s love for us. In the story of the Prodigal Son, Jesus describes God’s love for the sinner through the imagery of a father’s love. This love welcomed home the wayward son who had squandered the family name and the family’s riches at the expense of enjoying the world’s entertainment. But in perfect love the Father welcomed home His child.

To capture the essence of the son’s return, look back to the turn of the 20th Century and consider a sermon from the beloved puritan preacher, Alexander Whyte. His descriptive interpretation of our Lord’s parable allows us to step into the story to take a fresh look at the Father’s love for a son who had run after the world. The following is an excerpt from that sermon.

“And when he was a great way off, his father saw him. Our Lord sees him and makes us see him, which is why the story is told. Look at the young man. Look how he runs. He runs like a man running for his life. He forgets his bleeding feet and his hungry belly. He thinks of the father’s love before him which is greater than the world’s pleasures behind him. So, he runs as he has never run before. But at the first sight of his father’s house, his strength fails him. He stands still, he sinks down, and he beats his breast. He cries out . . . “against thee have I sinned.” The father had never been the same since the son left. He had walked up and down his house a broken-hearted man. Every night he sat and looked out the window until darkness fell again. And in the darkness, he listened for a footstep. But it never came. But, at last, one day! And when the son was a great way off, the father saw him, had compassion on him, ran to him, and fell on his neck, and kissed him.” (Warren Wiersbe, Classic Sermons on the Prodigal Son: Alexander Whyte)

Having revisited this beloved parable, take a moment to consider the movement of the young man from the world back to the father. Why is this scene so timelessly captured in our minds, perhaps even beyond other parables of our Lord?

So, for many, the emotion of the prodigal is all too real. You know the Father loves you, but you are left with regret when you give in to the world’s influence. But you are not destined to live in guilt and shame. The Father is waiting. He loves You. He seeks you. He runs to you.

A message from the Prophet Jeremiah captures this best: “Behold, days are coming, declares the Lord, when I will make a new covenant . . . I will put my law within their heart, and I will be their God and they shall be my people . . . they will all know me from the least to the greatest . . .I will forgive their iniquities, and their sin I will remember no more.” (Jeremiah 31:31-34)

This describes how God has run after us. Through sending Jesus Christ to die for us, God has reached down into our darkness and has offered light and life. His love is Perfect. He is the perfect Father. If your faith is in Jesus Christ, you are a recipient of the Father’s love. But, if your feet have slipped back into the world, or if you have gone the way of the prodigal and have plunged deep into the world, do not allow guilt and regret to become your byword. Instead, see the Father. There He is waiting for You. Running to you to embrace you, to kiss you, and to bring you into His arms. How could the world compare to such a love?

In the world and not of it! The Father’s love calls us to this. And Jesus had made the way!

READ – Read Luke 15 to be encouraged by the Father’s Love.