I volunteered to help with “Mud Out” July 9-16, after the June 23 flash flood in West Virginia. Some areas received over 9” of rain in a short time. Of course because of the mountains the rain concentrates in the valleys, creeks and rivers and cannot drain quickly enough. It was said that some rivers flooded 28’ above normal levels. Some said it rose 8’ in 45 minutes, others said 2 feet/hour. Either way, when people noticed the flood, it was too late to escape. Only 2% of the people had flood insurance. Many were not in flood zones and never expected a flood. To make matters worse, there were looters robbing those who were able to escape. There were 1500 homes destroyed, 300 businesses destroyed and 2500 homes damaged. Twenty-three people died and some have not been found yet in spite of extensive searches.

We went to the 1st Baptist Church in Fairlea, an unincorporated town near Lewisburg. Greenbrier County, which includes White Sulfur Springs, was one of the worst hit. The Baptists Disaster Relief Team, part of the North American Baptist Mission Board (NAMB) was well represented and were the first civilian responders on site were the Virginia Baptists with 2 water purification /shower trailers, laundry trailer, mobile kitchen, two power washer trailers. Kentucky also sent a mobile kitchen trailer, and another semi storage trailer for food prep and distribution. The NAMB command trailer, tractor & semitrailer, and tool trailer were on site along with a Army surplus generator unit, dishwashing station, hand washing stations, a U.S. Foods self refrigeration trailer and a freezer trailer along with a forklift and a dumpster. A total of 3,600 meals were prepared and distributed on the very first day. We met Baptist volunteers from Virginia, Tennessee, Kentucky, Indiana, West Virginia, Maryland, New York State and Ohio. The Red Cross, Franklin Graham’s “Samaritans Purse”, Salvation Army, and the National Guard were present in abundance as well.

There were other command centers around the state in damaged areas similar to the one I assisted.

We were dispatched with a tool trailer to homes as requested by NAMB to clean up. We crawled under the house’s to remove any wet insulation, or fiber ductwork; we took out the kitchen base cabinets, appliances, hot water heaters and any other equipment, which was ruined by the flood. We removed the drywall 4’ up from the floor along with the wall insulation and removed the flooring, and in some cases the plywood subfloor so that the floor sheathing could dry. Most of the homes we worked on did not have electricity. The Power Company had red tagged their meters and turned off the power for safety reasons. We had to depend on battery tools and muscle power.

The story, which was on the national news, was the burning house that floated down the fiver in White Sulfur Springs and hit the bridge. We heard the background on this one from a rescue squad volunteer. The lady of the house climbed up into her attic as the water rose around her. When her home floated, the gas line broke and filled her house with gas, then the electrical service line parted and the arc lit the gas that set the house on fire. The lady was rescued when the house hit the bridge but died 3 days later in the hospital.

An 82-year-old couple in Rainelle was trapped in their house with just their heads above the water. The husband, who suffered from dementia was held up by his wife but succumbed to hypothermia. The wife was still holding on to him until she was finally rescued about 18 hours later. Her body temperature was down to 87 degrees when she arrived at the hospital, and that was after riding in a warm ambulance covered with blankets.

One of the houses we worked on was Randy Gillam, Pastor of the White Sulfur Springs Baptist Church. His 14-year-old niece has not been found. The Grandfather tied her and two boys together with an extension cord when they were swept away. They bobbed to the surface several times and the last time she was gone. The bodies of the other three have been found.

We helped Barbara Long, an 81 year old, widow and former waitress at the Greenbrier. Her small home in White Sulfur Springs on Patterson Street has been gutted; all furniture, carpets, appliances and her Kitchen cabinets were piled into the street. She will receive a small amount of money from FEMA, but it will bee insufficient to repair her home and she lives on her small Social Security pension.
A group from Kaiser Baptist Church, in West Virginia, led by the Pastor, Jody Bean, came to work and brought $500 which had been collected and asked me to suggest a good use for it. I suggested Ms. Long and a meet was arranged and which led to an emotion filled but joyous occasion.

I would like to further help Ms. Long with replacing her Kitchen. If she agrees, I intend to make her new knotty pine base cabinets in my workshop and purchase the countertops. Her Kitchen now has exposed old-fashioned wood lath with a layer of drywall that needs to be repaired first. 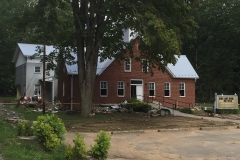 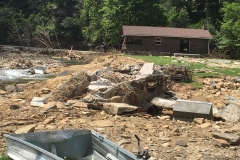 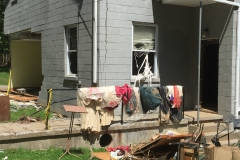 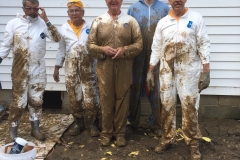